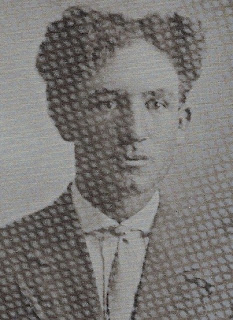 The second from the youngest child of Rosanna and Edwin Spackman was born 5 May 1887 in Cove, Utah. He was #11.
He had a busy childhood as all children did then. There were always chores to do around the home. Some of the older children were married and had moved away by then which left lots of work for the younger ones.
We are related doubly to Uncle Brig through his marriage to Lillian Hansen. She is a 1st cousin to Grandma Iris and also her very close friend. Lillian and Iris grew up together and remained close friends throughout their lives.
Brig and Lilly were married 6 September 1911 in the Logan Temple and moved to Lewiston where he worked for the Sugar Co.
Their first baby, Lois, was born prematurely after Lilly had tried to move a heavy barrel of water. She and the baby almost died.
They left Lewiston and went to Downey to live. They lived on nothing but jack-rabbits. It was too hard for them and they moved back to Richmond to live with Grandpa and Grandma Spackman where James, their first son, was born.
They then moved from Richmond to Preston. Lilly’s father gave them two acres of land on which they built a two room home. Laura and Harold were born in Preston. They moved to another place in Preston called the Eldridge place. On it was a ten-acre orchard where Brig soon cleaned out and burned all the old brush. One day Laura walked through the hot ashes and burned her feet. It took about a month for them to heal.
After about five years in Preston, they moved back to Richmond on the Ririe place east of the Gilt Edge Mill. Brig rented land from Albert Bergeson and Hyrum Ririe. They then left there and moved to the Bullen ranch in Lewiston where they milked cows for Newell Bullen for $75 a month. It was here that Harold had rheumatic fever. His chin was drawn down to his chest for about two months. After the doctor had done all he could, Amos Hodges and Bishop Joseph Bergeson were called in to administer to him. Soon after that he began to get well. Just as Harold was feeling better Jim came down with typhoid fever and because of a severe high fever, he was unconscious part of the time. He remained very ill for 3 weeks. While here on the ranch, Don and LeRoy were born.
Brig bought 35 acres of ground in Trenton for $3500 from Henry Spackman. On this ground they built a small home. It was here that Morland and Leona were born.
Lilly was a wonderful mother who took good care of her family. She was a good cook (although she said she didn’t like to) and she was an excellent seamstress. She could make something out of nothing. She did a lot of crocheting and embroidery work and did a beautiful job of it. She also liked to make quilts. They didn’t have much room to put a quilt up to work on so they put it down in the day time and tied it up to the ceiling at night so they could make down two beds in the living room. She was a hard worker and did things on the farm that any man could do.
She seemed to know when she was going to die and had her own funeral arrangements written down when she passed away. She always said she would not live to be 50 years old. She went in for surgery in the hospital but never regained consciousness. She was 49 years old.
Uncle Brig married Leona Glauser 23 January 1951 and to them were born three daughters: Gladys (died at birth), Rosanna, and Martha Rae.
Brig passed away 25 August 1969 and is buried in Preston, Idaho.
Posted by Becky at 9:11 PM